Accumulation of reactive oxygen species (ROS) causes the occurrence of numerous disorders, such as cancer, as well as cardiovascular, inflammatory and neurodegenerative diseases.
An efficient strategy against such diseases relies on efficient diagnostic of the incipient stages of development using imaging techniques, but also on effective therapeutic systems. Systems containing nanoparticles with combined diagnostic and therapeutic capabilities, called theranostic agents, represent a new strategy for reducing the economic burden for healthcare systems produced by the effects of these diseases.
This multidisciplinary project will determine the cytotoxicity and the biodegradation of cerium oxide-iron oxide nanoparticle platform. This will be done using an acid medium mimicking the biological environment, in vitro using various 2D and 3D culture systems and in vivo using a murine model. The follow-up of theranostic agents in biological media will be studied up to two weeks for the in vitro model and up to three months for the in vivo murine model using Transmission Electron Microscopy (TEM) techniques: conventional TEM and electron tomography for biolocalization and biodistribution of nanoparticles and their potential induced necrosis to cells; High Resolution TEM, Selected Area Electron Diffraction for biodegradation and biotransformation; Electron Energy Loss Spectroscopy combined with Scanning TEM for evolution of oxidation states of O, Fe and Ce.

The purpose of this multidisciplinary project is to evaluate the efficacy of the studied theranostic agents biodistributed in biological media using Transmission Electron Microscopy techniques.

The studied theranostic agents containing nanoparticles of iron oxide (maghemite - γ-Fe2O3) and cerium oxide will agglomerate, after their injection in mice, in macrophages inside phagolysosomes. The evolution of these nanoparticles will be followed  on a long period of time up to 120 days after administration. In time, because of the acidic medium from phagolysosomes, the nanoparticles will be degraded, most of them will change their crystalline structure. This biotransformation will be evidenced by electron diffraction patterns and EELS spectra.
These results will be compared with the ones obtained in an acidic environment mimicking the biologic one, as well as in 2D and 3D cancerous cell cultures.

The degradation of the chosen CO-ION platform was studied using an acidic medium similar with the one found in lysososmes. The biodegradation experiments were conducted in citric acid at various values of pH and certain time periods after the insertion of nanocomposites in acidic medium. The investigations carried out using CTEM, SAED, HRTEM EDS and EELS techniques demonstrated the acidic medium didn't provoked changes of morphology, crystalline structure or chemical composition  of nanocomposites in the period of 3 weeks. 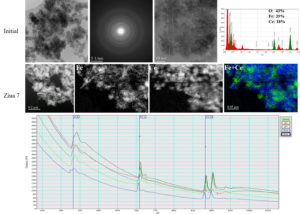