The project activities are designed to find the answers to several critical pending issues, such as the pyroelectricity and the origin of ferroelectricity in HZO and of the negative capacitance effect, or the sustainability and limits of AlN-based sensors in harsh environments. Ferroelectric memories, metal-insulator-semiconductor and thin film field effect transistors structures will be fabricated and subsequently analyzed, and the results will be interpolated and discussed with
respect to the physico-chemical features of the AlN and HZO thin films. CVD and ALD techniques are underdeveloped in Romania, even though they have demonstrated tremendous advantages and applicability potential for the development and large-scale production of nano- and micro-electronics. Thereby, the development and successful application of the CVD and ALD techniques, in the framework of this project, for the deposition of high-quality thin films, will represent an important achievement, of high-interest, at both regional and national level.

O1. Obtaining HZO thin films by ALD method and the investigation of their physical properties; degree of completion: 100 %.

HZO films were obtained by the ALD method. The impact of the variation of all process parameters on the structural, morphological, optical and electrical characteristics was tested.
The obtained layers were integrated in capacitor / MIS type structures.
The pyroelectric character of HfO2 -based films was highlighted.

O2. Obtaining AlN thin films by CVD method and the investigation of their physical properties; degree of completion: 100 %.

AlN films were obtained by the CVD method. The obtained layers were characterized structurally, morphologically, optically and electrically.
The manufactured films were integrated in pyroelectric sensors that were tested at different temperatures.

O3. Fabrication of HZO/AlN multilayer devices and their functional characterization; degree of completion: 100 %.

Electronic devices based on AlN/HZO multilayer were fabricated and characterized. 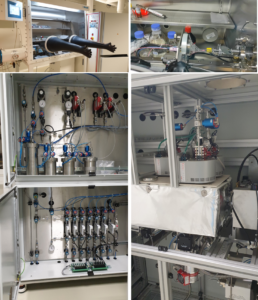 HfO2 films crystallized predominantly in the monoclinic phase, but the presence of the orthorhombic crystalline phase was was highlighted by XRD and SAED analyzes. The obtained films are pyroelectric. Moreover, the Capacitance-Voltage measurements indicated that some of HfO2-based materials have semiconductor properties.

The AlN films, deposited by CVD, have a hexagonal polycrystalline structure. They have a dielectric constant of ~ 12 and a breakthrough field greater than 12 MV/cm. The thin layers of AlN have been successfully integrated into pyrotechnic sensors that have been tested at various operating temperatures.

For AlN films, Tris(dimethylamido)aluminum(III) and NH3 precursors were used.