Home Scientific Results Publications
Project ID: 531PED from 23/10/2020 (PN-III-P2-2.1-PED-2019-4468)
Project Director: Dr. Adrian SLAV
Project Type: National Project Program PED
Funded by: Romanian National Authority for Scientific Research, UEFISCDI
Contractor: National Institute of Materials Physics
Project Status: In progress
Start Date: Friday, 23 October, 2020
End Date: Sunday, 23 October, 2022
Project Abstract: The main goal of this project is the obtaining by magnetron sputtering (MS) deposition and hydrogenation of GexSn1-x:H alloy, a new photosensitive material for fabrication of high sensitive broadband photodetectors. By increasing the Sn concentration in GeSn alloy, the bandgap is narrowed and changed from indirect to direct bandgap semiconductor, making GeSn a good candidate for photodetectors with extended sensitivity to short-wave infrared range (SWIR). At international level, the hydrogenation of GexSn1-x to obtained amorphous and nanocrystalline GexSn1-x:H represents the novelty of the project proposal. The role of hydrogen in GexSn1-x:H alloy is to passivate the structural unintended defects, in order to increase the photosensitivity. This is similar to other semiconductors based on group IV of elements (a-Si:H and a-SiGe:H) intensively studied and reported in literature. Two different technological routes of obtaining GexSn1-x:H will be investigated: i) MS deposition of GexSn1-x films with various Sn content followed by hydrogen plasma treatment at different annealing temperatures; ii) direct deposition of GexSn1-x:H by reactive MS in atmosphere of hydrogen diluted in argon. In both cases, the nanocrystallization will be obtained by in-situ annealing during MS deposition or ex-situ by RTA treatment. For achieving the final goal that of obtaining a broadband photodetector with high sensitivity in SWIR, complex characterizations of GexSn1-x:H layers will be performed to find out the optimal technological parameters of the demonstrator. The demonstrator will be functionally tested in the lab according to TRL3. Such photodetectors with high sensitivity in SWIR are imperatively desired to replace the actual market devices based on toxic materials PbS and InGaAs. The results of the project activities may serve to future research on GexSn1-x:H for other practical applications as for example tandem a-SiGeSn:H solar cells.

Photoconductive GexSn1-x:H nanostructures with various Sn concentrations in GeSn nanocrystals were obtained by the magnetron sputtering method . The hydrogenation of the structures was done by RTA in the temperature range 150 oC­­­ –  400 oC in the atmosphere of H2 and by deposition in working gas (Ar) with 10% and 30% H. In the case of in-situ hydrogenation the substrate temperature was maintained at 30 oC (RT) and 200 oC. For GexSn1-x co-deposited and hydrogenated by RTA, through increasing the annealing temperature and the Sn concentration we obtained the increasing of the Ge:Sn ratio in the GeSn nanocrystals, simultaneously with the increase the content of segregated Sn in the β-Sn phase. GeSn nanocrystals are formed at low annealing temperatures (150 oC and 300 oC) without arising the β-Sn phase (up to 400 oC). By increasing the annealing temperature, the Sn concentration in nanocrystals decrease down to ~ 7%. Shifting diffraction peaks to small  2q angle shows that the lattice constant increase by including Sn in the Ge crystalline lattice. Electron microscopy images shows columnar crystalline areas alternating with amorphous zones with lengths of 25 ­­­– 35 nm and 7 nm size. By EDX compositional analysis the Sn concentrations  was evaluated between 7.55% and 9.94%, values ​​that are in good agreement with the results obtained by µ-Raman spectroscopy. Also, from XPS we found similar  values for Sn concentration in the GeSn nanocrystals. From the Tauc representation of the optical absorption coefficient we evaluate the effect of hydrogenation on defect states. Also, by FT-IR spectroscopy the Ge-H vibration mode was evidenced at 1873 cm -1. The I-V electrical measurements showed a strong rectifying character of the GexSn1-x:H structures at low temperatures due to the GeSn heterojunction with the Si support. For the GexSn1-x:H samples with 30% H, the spectral response was extended up to 2 µm in comparison to samples with weaker hydrogenation (10%). In addition, better hydrogenation decreases the dependence of the photocurrent on the bias voltage by reducing the defect states in the gap. 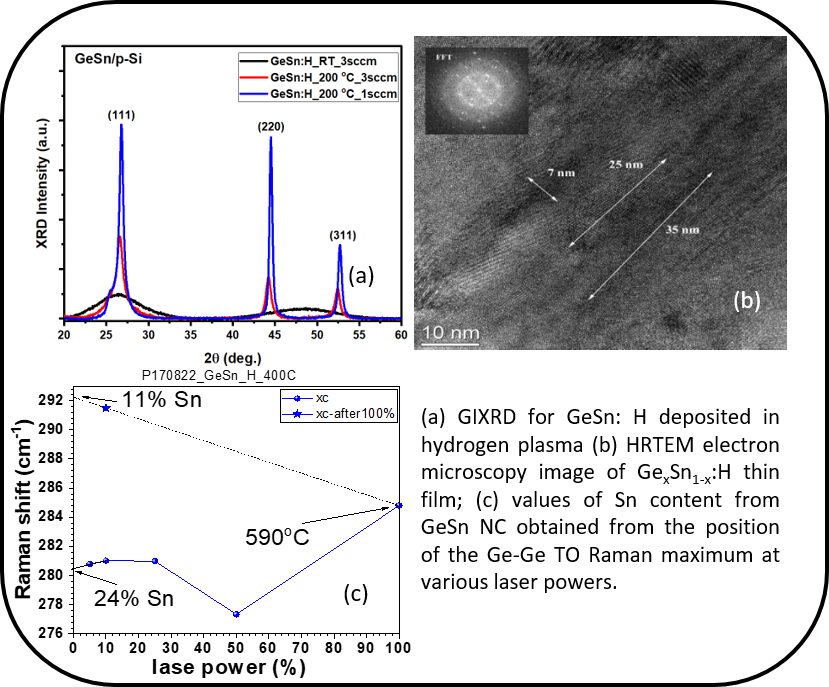 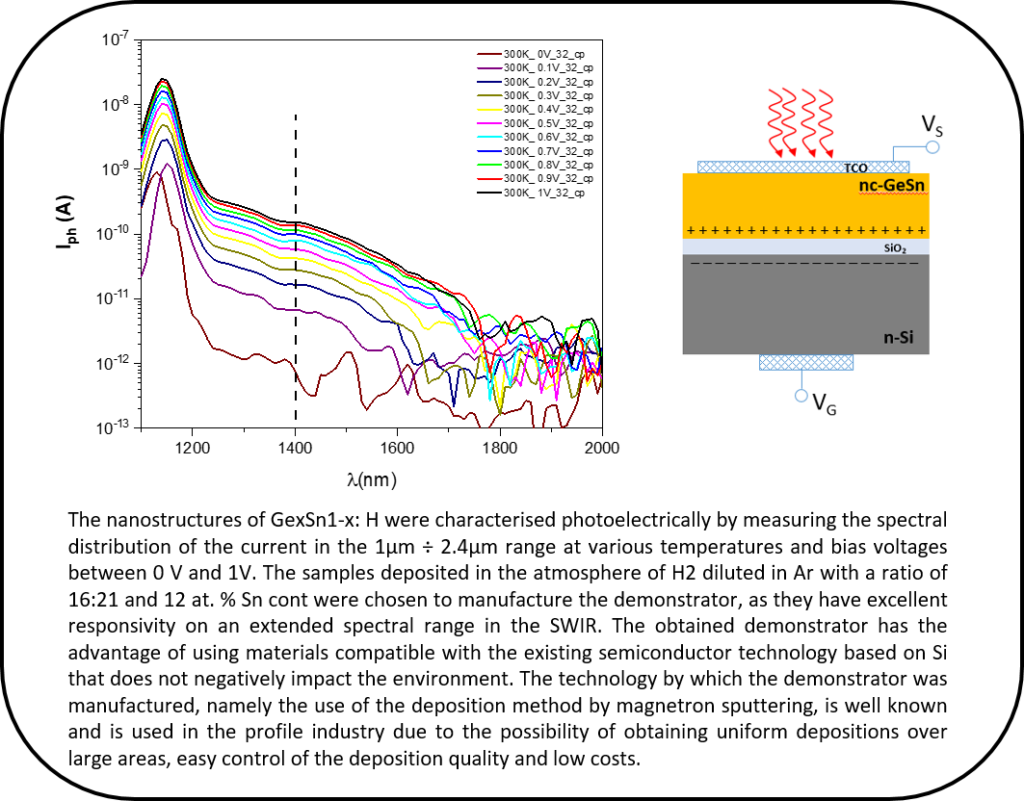