CONTROL OF ELECTRONIC PROPERTIES IN FERROELECTRIC PEROVSKITE HETEROSTRUCTURES: FROM THEORY TO APPLICATIONS

The main objective of the project is to obtain ferroelectric materials with controlled electronic properties at the same level as these properties are controlled in Si. This will be realized by hetero-valent doping, correlated with stress engineering and band gap engineering without affecting, as much as possible, the ferroelectric properties. The main objective is complex and ambitious because, up to date, there was no experimental demonstration that it possible to obtain n or/and p type conduction in epitaxial ferroelectrics. The successful achievement of this objective will open a new domain, that of ferroelectric electronics or ferrotronics, by producing electronic devices of p-n homo-junction type or junction transistors with ferroelectric materials. Two types of materials are envisaged, namely lead titanate-zirconate (PZT with tetragonal structure and a mixed bismuth ferrite (BFO) with bismuth chromit (BCO). In the first case the heterovalent doping will be studied on Pb or Zr/Ti sites with the aim to obtain n and p type conduction. The final goal is to produce a p-n homo-junction based on epitaxial PZT films. In the second case band gap engineering will be tested by varying the Fe/Cr content, and the dominant conduction mechanism will be identified, the goal being to use the material in photovoltaic applications. The activities will contain: theoretical studies regarding the relation between dopants, electronic properties and the ferroelectricity, including self-doping effects or electrostatic doping; target preparation for deposition of thin films; epitaxial growth of the film; characterization activities of the structure and physical properties. Not only classic doping in the target is envisaged but also doping during the epitaxial growth. The consortium is composed of 4 teams from three different institutions, including a number of 14 young researchers full time equivalent.

O2. Design and fabrication of FeRAM memory cells with non-destructive readout. Capacitive, conductive and pyroelectric readout will be tested.

O3. Design and fabrication of multi-bit FeRAM memory devices. One can try to obtain structures with multiple polarization states.

Activities are groupd in 6 workpackages (WP):

WP1. Theory and simulations. CO and P2 will collaborate for theoretical modelling of dopants in ferroelectrics.

WP2. Target preparation. CO and P3 will collaborate to realize the undoped and doped targets. During the project implementation interesting results were obtained regarding the presence of negative capacitance effect in ferroelectric capacitors of PZT type.  This effect can help to reduce the power consumption in field effect transistors, including for non-volatile memories. The topic is intensively studied, with publications in prestigious journals, such as Nature. The Project Director is co-author to the article published in Nature 565, 464 (2019).s41586-018-0854-z Considering the importance of the subject, research was initiated to investigate the presence of the negative capacitance effect in the samples grown in the frame of the project. The obtained results were published in Physical Review Applied.

The Project Director was the main organizer of the 6th edition of the International Workshop of Materials Physics (IWMP). Below are the first announcement and the program of IMP.

The National Institute of Materials Physics (NIMP) announces the organization of the 6th edition of the International Workshop of Materials Physics (IWMP). The topic for 2021 edition is dedicated to ferroelectric and multiferroic materials, with special emphasis on thin films, multilayers, super-lattices and nano-objects. Aspects related to modeling, fabrication, characterization and potential applications will be presented and discussed.

Similar to the first five editions, the 6th edition of IWMP is organized on invitation only. The aim is to attract well known researchers in the field, the final purpose being to establish new collaborations concretized in common publications, projects and exchange of personnel.

Young researchers willing to present their latest results on topics related to the main topic of the workshop are invited to submit a 2 page abstract (A4, Times New Roman 11, single spacing, 2 cm margins, including figures and references) to the organizers (pintilie@infim.ro). The best abstracts will be selected for oral presentations during the workshop.

The workshop will take place at NIMP premises located in Magurele, Romania.

9:40-10:20: Brahim Dkhil: Playing with domains in ferroelectric polymers and hidden states in relaxors for neuromorphic computing Group photo with the participants to 6th edition of IWMP.

Theory and modelling-effect of dopants on PTO energetic structure Figure 2: Total DOS comparison between the non doped PTO (top plot) and the spin polarized total DOS for the Fe substitution of Ti atom case (bottom plot). The red and blue lines represent the contribution to the DOS of the Fe atom (spin-up in red and spin-down in blue).

It was evidenced that the background static dielectric constant in PZT is of low value and depends on the amount of structural defects and on the magnitude of the applied electric field. Fig. 3a) The thickness dependence of the dielectric constant evaluated from C-V measurements performed at 100 kHz. Evaluation was performed in three cases: at 0V “static”; at 0V “dynamic”; at maximum applied voltage “dynamic”; b) TEM images for 20 nm and 150 nm thick samples (inside each image the notations are a-low magnification image cross-section; b-SAED image; c-low magnification HR-TEM image; d-high magnification HR-TEM image of PZT/SRO interface and SRO/STO interfaces; these images demonstrate the high quality of the epitaxial growth).

Memcapacitance and memcomputing was demonstrated in layered ferroelectric structures FIG. 4. Logic operation using an F-I -F capacitor. The representation of the polarization states in an F-I -F structure during different stages (initialization and computation) of a logic operation for the OR/NOR case (a) and for the AND/NAND case (b), together with the corresponding simulations of the logic operations obtained by changing the capacitance state (HCS or LCS) of the system using different combinations of pulses. The HCS and LCS states can have 0 or 1 values associated for logic operations and the results are memorized on the computation cell and can be accessed at any time. Variation of the atomic O/Ti ratio indicating the source of oxygen vacancy (a) for the system ferroelectric/metal, with different electrode metals and polarization orientations (b). (c) the charge profile associated to oxygen vacancy density for different thicknesses of the metal layer. (d) the band bending at the interface.

The effect of negative capacitance (NC) was evidenced in PZT epitaxial capacitors (Phys. Rev. Applied 14, 014080 (2020)). NC occurs during polarization switching, being accompanied by a large increase of the current flowing through the capacitor. Fig. 2 a) the opening of the polarization hysteresis loop as the amplitude of the triangular voltage pulse is gradually increased (the red arrow mark the increase); b) the C-V characteristics derived from the hysteresis loops presented in fig. 2a. The arrows mark the increase and decrease of negative capacitance observed for voltages corresponding to the domains marked in fig. 2a).

It was proposed that, in high quality epitaxial PZT films, the polarizations switching may have place without formation of domains with opposite orientation of polarization, as suggested by the Figure below. First attempts were made to deposit doped films. Co-deposition method was used meaning successive deposition of layers from the pure PZT target and from Nb oxide or Fe oxide targets. TEM studies revealed that co-deposition is perturbing the epitaxial growth. However, significant differences were obtained in the electrical properties. TEM images for the Nb doped PZT by co-deposition.

An interesting results was obtained when graphene was deposited on ferroelectric PZT. The graph below shows the conductance hysteresis in graphene, produced by polarization switching (published in RSC Adv., 2020, 10, 1522). Some important results were obtained in 2021.

First, it was shown that there is s direct link between structural quality, polarization reversal (homogeneous versus non-homogeneous) and the amplitude of the dynamic/transitory, differential negative capacitance effect. The experimental results from electric and PFM investigations point out that the switching in high quality epitaxial films is, most probably, homogeneous, with a large amplitude of the dynamic/transitory NC effect associated to polarization switching, while in polycrystalline films the switching is non-homogeneous, with weak NC effect. TEM images of PZT films deposited by PLD on SRO/STO substrates (epitaxial quality) or by sol-gel on Pt/Si substrates (polycrystalline). The electric and electronic properties of PZT-Nb and PZT-Fe are summarized in the next table.

For example, in collaboration with researchers from Demokritos research center from Greece, we have demonstrated the presence of a metastable ferroelectric phase in very thin HZO layers (results published in COMMUNICATIONS PHYSICS 5, 178 (2022)) 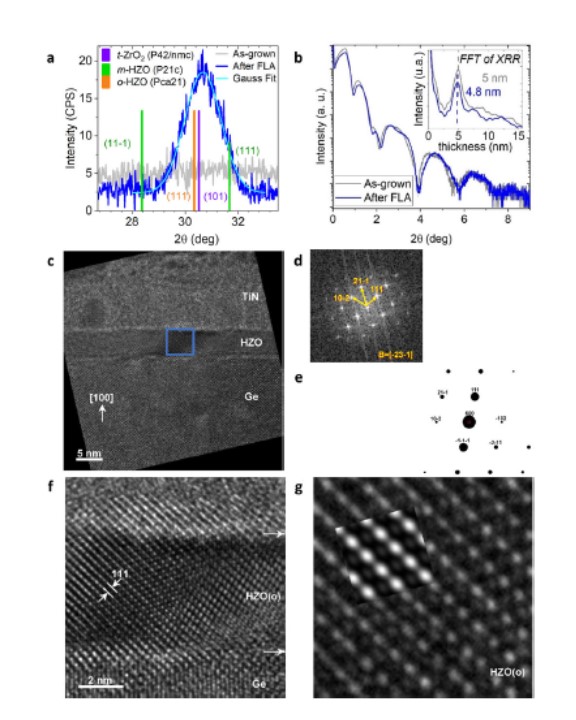 Structural investigation of the very thin HZO layer, demonstrating a good crystallization and the presence of the orthorhombic (O) ferroelectric phase.

Another interesting result is that ferroelectricity modulates the polaronic coupling at multiferroic interfaces. The study was performed on PZT and BTO thin films grown on LSMO substrates, and the results were recently published in COMMUNICATIONS PHYSICS 5, 209 (2022). 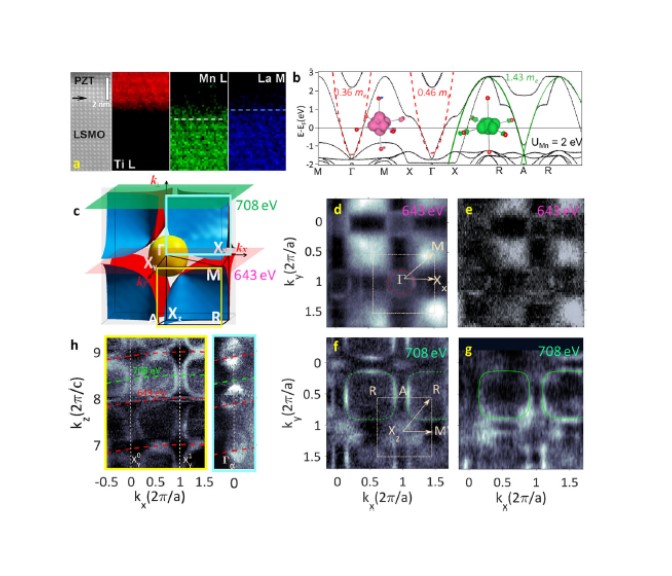 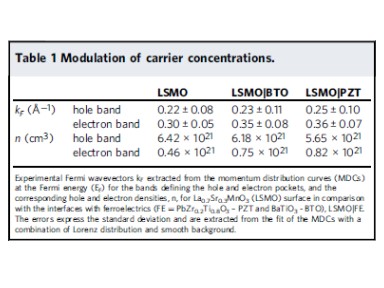 Table showing modulation of carrier concentration due to ferroelectricity.

There are also other interesting results which were not published yet. For example, it was found that the I-V characteristic of a ferroelectric p-n homojunction based on tetragonal PZT is quasi-linear, suggesting a resistive like behavior (see the graph below for a p-n homojunction with equal thicknesses of the component layers, of 100 nm). n-type conduction was obtained by doping with Nb, while p-type conduction was obtained by doping with Fe. 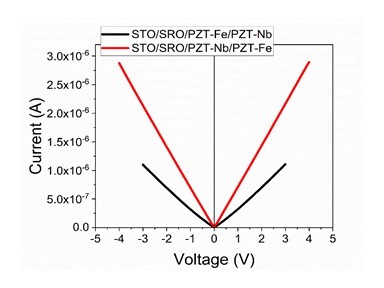 This behavior was explained assuming that the total current flowing through the ferroelectric p-n homojunctions is formed by summing the electron and hole currents injected at the electrode interfaces: 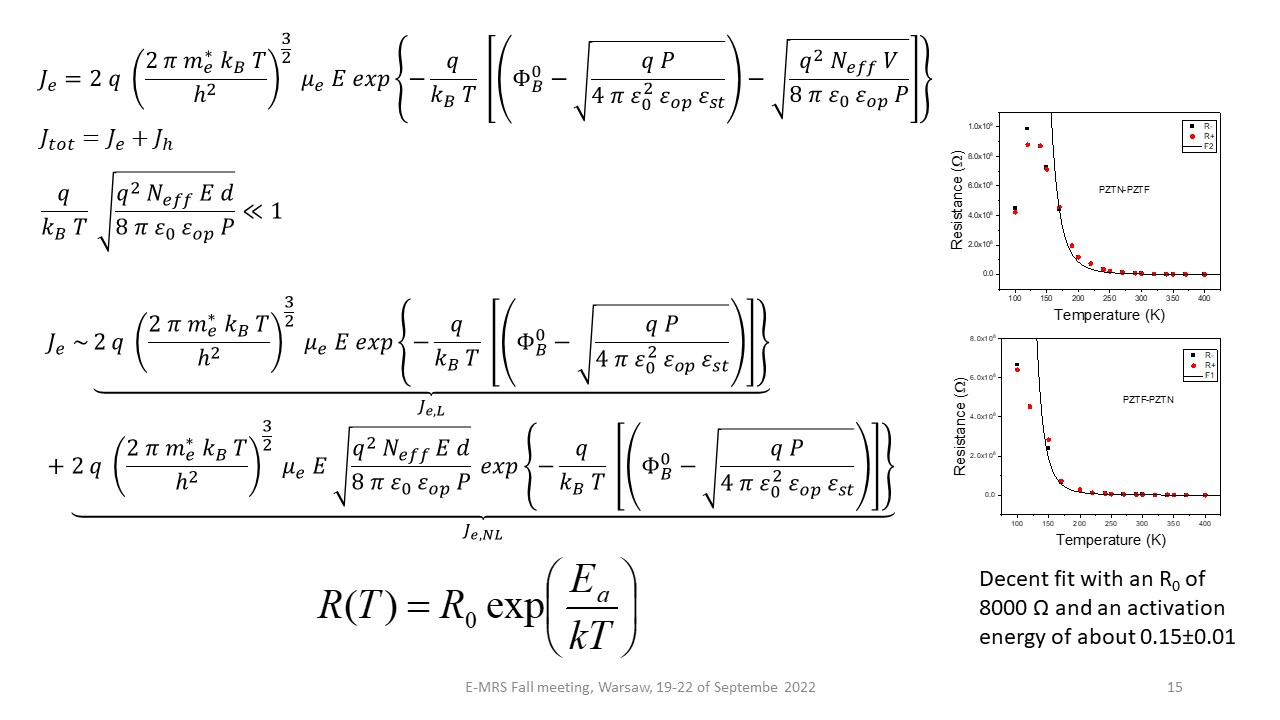 These results were presented for the first time at the international conference E-MRS Fall Meeting, held in Warsaw.

At present the PI is working on a new model for polarization switching in displacive ferroelectrics, based on the hypothesis that the switching is completely homogeneous, flip-flop type, and is triggered by the charge injection at electrode interfaces (invited presentations at E-MRS Spring Meeting and AMSE 2022, both presentations were on-line). 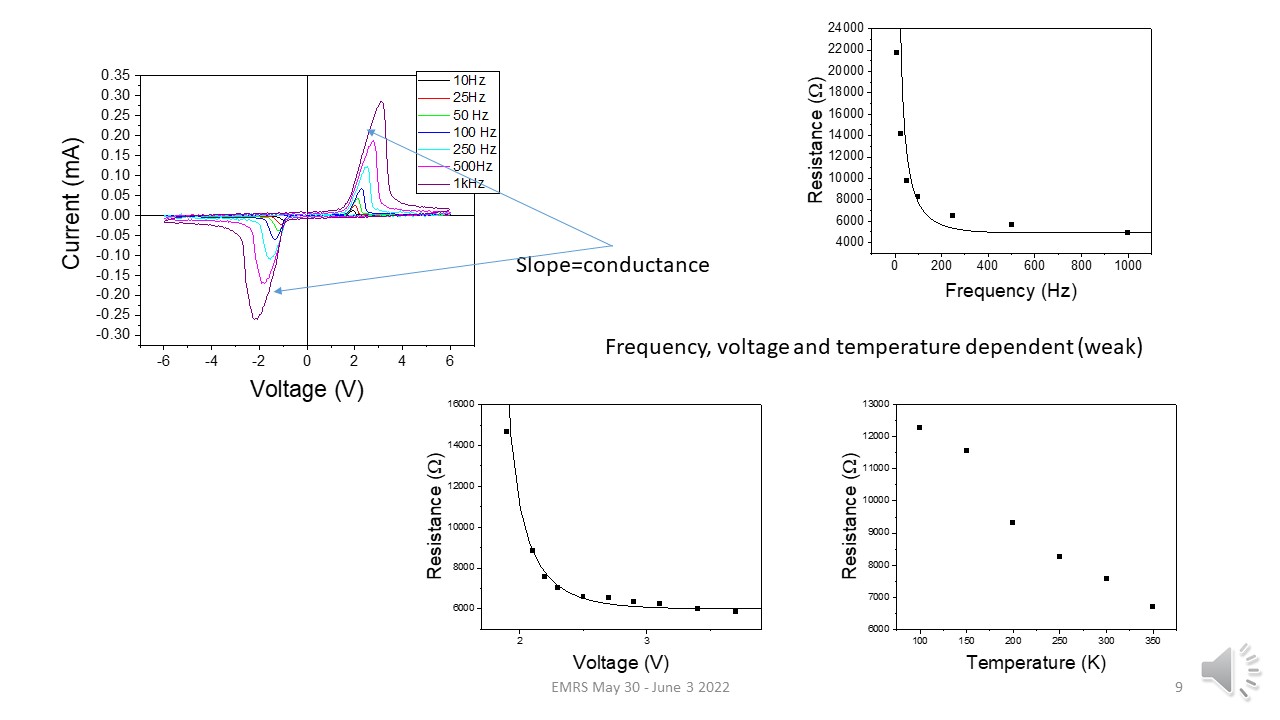 The hypothesis is base on the observation that the increasing part of the current peak recorded during polarization switching has a quasi-linear dependence on the applied voltage, therefore a conductance/resistance can be estimated from the slope of the I-V representation. This has voltage, frequency and temperature dependence, as shown in the above graphs. 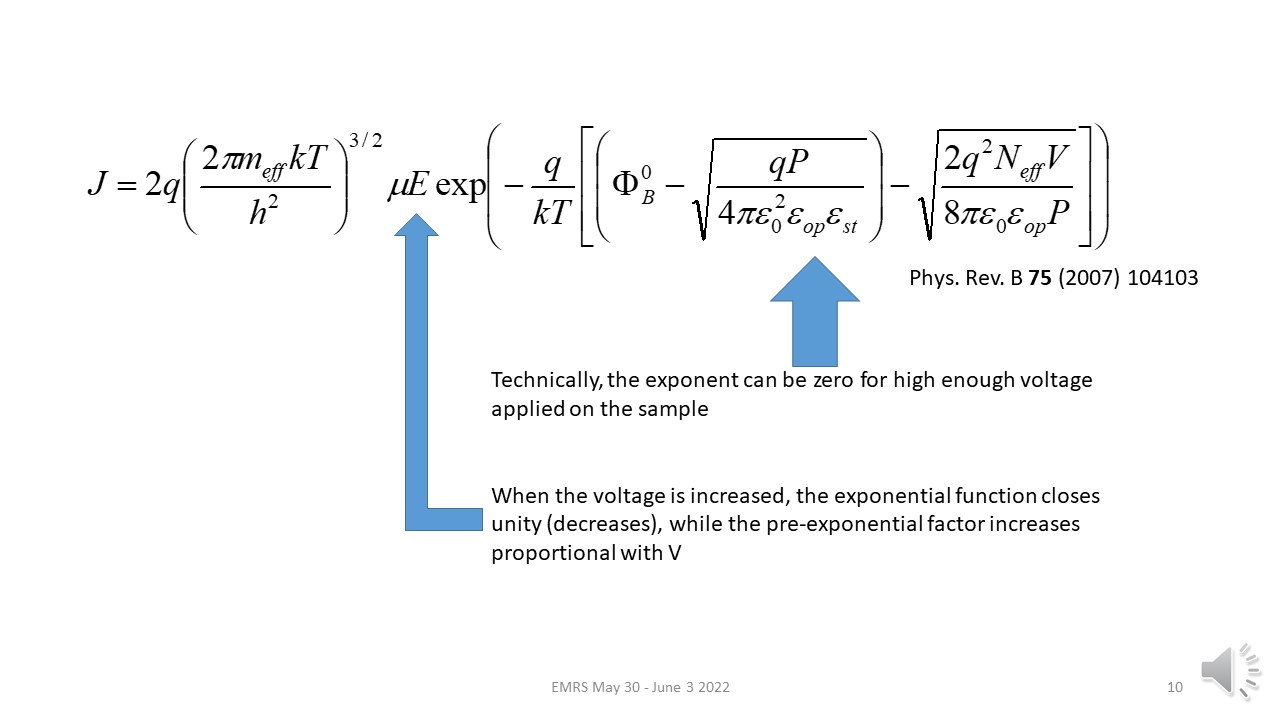 The equation for the current density in the case of a Schottky injection influenced by the bulk mobility of the injected carriers suggests that the exponent can be negligible for high polarization values, low values of the dielectric constant, and large values of the applied voltage. In this case, when the exponential term is negligible (close to unity), the current density has an ohmic like form, as observed experimentally. 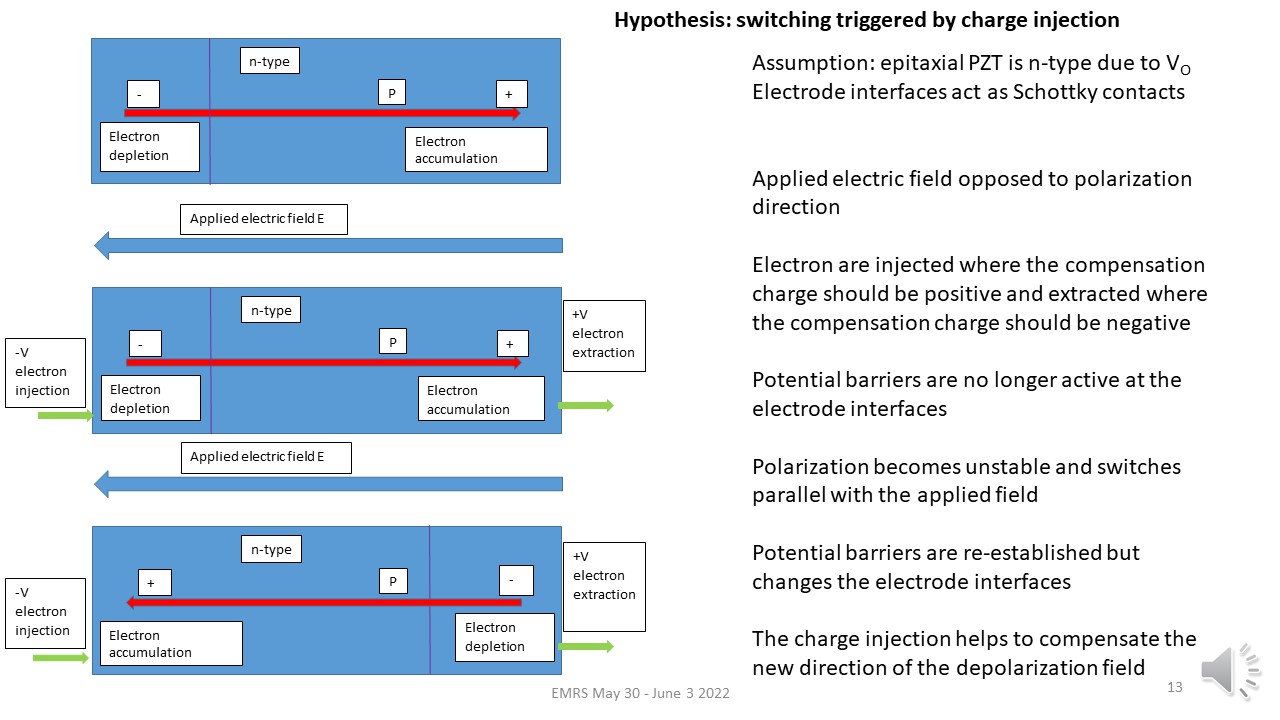 A sketch showing how the injected chares can trigger the polarization switching, just because they destabilize the previous charges involved in the compensation of the depolarization field.

The Project Director is Professor (associated) to the Doctoral School of Physics of the University of Bucharest.

Currently he has 4 PhD students, 2 of them being in the team of the project.

The Responsible of P1 is also Professor (associated) to the Doctoral School of Physics of the University of Bucharest.

He has 2 PhD students in the team.

The Responsible of P3 is Professor at University Politechnica Bucharest and has 2 PhD students in the team.

Complex electrical, photovoltaic and pyroelectric characterization of ferroelectric based structures.

Development of applications, such as memory devices, field effect transistors or pyroelectric detectors.