The project brings together three new technologies: a) the using of modified bacterial cellulose for FLOEDs substrates by improving the transparency and mechanical properties. This type of technology covers the flexibility class of materials in which the glass substrates are removed from the future electroluminescent diodes. Besides this aspect, the future of the FOLEDs opens new perspectives in the optoelectronic area; b) applying the electrospun web technology for the FOLEDs anodes to increase the light output of these devices. The appliance of this technology will offer an alternative of the brittle and expensive indium tin oxide, allowing the improvement of the rolling technologies for the displaying and lightening domain; c) integrating of the new organometallic compound with dual electroluminescence as emissive layer and comparison with the commercial one. The strategy consists of using a freestanding sandwich structure with successively deposited organic layers onto a transparent electrospun metallic web as an anode. Thus, this structure will be easily attached to the glass and BC composite membrane by thermal transfer to obtain either OLEDs and FOLEDs devices. A comparison between the luminance of the FOLEDs and OLEDs will be performed related to the transparency of the BC substrate and electrospun web anode. The level of the involved technologies will be tested and validated in laboratory conditions as a functional system while the performances will be highlighted in comparison with classical technologies. 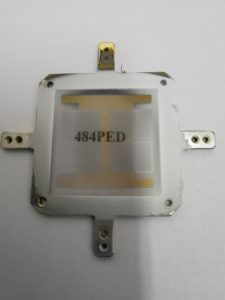 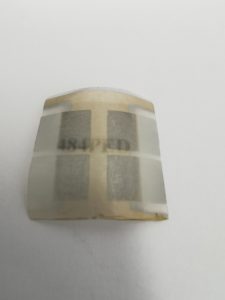 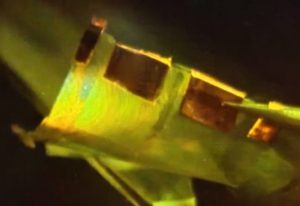 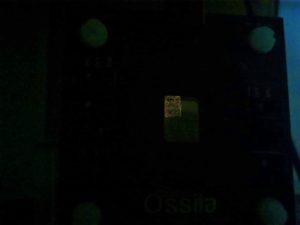 Fig.1.d. Electroluminescence of OLED with electrospun electrodes as cathodes

Fabrication of flexible, self-supported, and transparent diodes using the techniques described in this project may be beneficial for improved functionality of FOLED devices such as two-sided emission or for electronic display devices embedded in objects such as clothing or wearables, increasing at the same time the specific parameters, including the emission quantum efficiency. Within this project, freestanding transparent diodes were obtained starting from electrospun fibers used as electrodes on which different organic layers were deposited, obtaining a stable sandwich structure, with a patterned structure (figure 1a). This structure was transferred onto a flexible substrate of functionalized bacterial cellulose with the highlighting of the optical emission (figure 1 b and c). Metalized electrospun fibers were also used as a cathode in organic electroluminescent diodes, their emission under the action of the electric field being recorded in figure 1d.

Fabrication procedure of OLED devices with electrospun electrodes as cathodes.

Stage 1 of the project entitled “ Flexible organic light emitting diode on bacterial cellulose substrate with transparent electrospun web anode” (Acronym: FOLEDBCtransWEB) (PN-III-P2-2.1-PED-2019-1459, no. 484PED⁄2020) includes the first activity from within the first work package entitled "Obtaining a freestanding sandwich structure by successively depositing the organic layers onto an electrospun metallic web and characterization of the OLEDs”.

The results of the preparation and characterization of the metalized electrospun transparent fibers are highlighted during the scientific and technical description of the first activity in the project.

During this activity, a series of PMMA samples were made, deposited by the electrospinning process, and covered with metallic layers of gold, silver, and ITO to obtain metalized webs that will act as an anode for FOLED devices. The optical properties of these fibers were highlighted by optical transmission measurements. Their morphology was highlighted by SEM analysis, and the electrical properties were analyzed by four-point probe measurements to determine the sheet resistance of the metal layer. During this stage, it was possible to select the optimal fibers regarding their mechanical properties and conduction depending on the deposited metal. Thus, the best results were obtained on gold-coated PMMA fibers, which will later be used as anodic layers because it has high electrical conduction even at low fiber densities (high optical transmissions), as well as a band alignment, suitable for the next p-type conductive polymer layer.

Stage 2 of the project entitled “ Flexible organic light-emitting diode on bacterial cellulose substrate with transparent electrospun web anode” (Acronym: FOLEDBCtransWEB) (PN-III-P2-2.1-PED-2019-1459, no. 484PED⁄2020) includes the activities from within the first work package entitled "Obtaining a freestanding sandwich structure by successively depositing the organic layers onto an electrospun metallic web and characterization of the OLEDs” and also the activities from the “WP2. Preparation and characterization of transparent BC membrane substrates”.

In task no. 2.1, the fabrication of “free-standing” self-supporting devices was made by successively depositing the organic layers on the metalized and optimized PMMA fibers from stage 1. The activity of obtaining PMMA fibers was resumed in this stage as well, to optimize the final free-standing structure, after the deposition of the organic layers. In this context, PMMA fibers with optical transmissions between 25-90% were obtained on which an anodic layer of gold with different thicknesses was deposited. Organic p-type conductive polymers (Hole Transport Layer -HTL) with different chemical structures were deposited on these fibers: PEDOT-PSS, TPD, PVK, benzanthracene, as well as organometallic compounds emissive layers: Alq3, Ir (ppy)3 and IrQ (ppy)2. In the end, the cathodic layer of LiF/Al was deposited. Each layer deposition also led to a selection of the fibers obtained (from a total of 350 samples), depending on the optical transparency to ensure a successful deposition of all the layers in the device.

Each layer was characterized, as appropriate, by optical methods (UV-Vis, Raman, FT-IR, luminance), morphological (SEM), electrical, and the thickness of the layers was determined by AFM and cross-SEM measurements.

In task no. 2.2. it will be considered the assembly of these optimized layers in order to obtain a free-standing device and its transfer on a glass substrate for performing the electrical measurements.

These composite membranes were characterized by optical methods (UV-Vis, FT-IR), structural (SEM), and thermal (DSC) in activity 2.4. Activity 2.5 performed the deposition of a SiO2 thin layer as a barrier against humidity, a fact that was highlighted by optical and structural measurements.

Stage 3 of the project entitled includes activities within work package 3 "Integration of component structures in FOLED-type devices and characterization of the obtained device performances", as well as activities from work package 4 "Comparison between the performances of FOLED and OLED-type devices". In activity 3.1.1, the process of transferring the freestanding structures based on Irq(ppy)2 and Ir(ppy)3 described in stage 2, on the bacterial cellulose substrate was described. The FOLED devices thus obtained were analyzed by optical measurements to highlight the influence of the polyvinyl alcohol used in the functionalization of bacterial cellulose membranes, on the emission of the freestanding structure after thermal transfer. Activity 3.1.2 was carried out following the same steps in the manufacturing methodology of bacterial cellulose membranes followed in activity A.2.3 from stage 2 of the project in which bacterial cellulose was functionalized with polyvinyl alcohol at a concentration of 5%. In this activity, polyvinyl alcohol of concentrations 7, 10, 12, 15, 20, and 25% were used for functionalization to obtain more transparent and mechanically resistant membranes. Activity 3.2 begins with the study of the current-voltage characteristics by highlighting the conduction mechanisms on the devices obtained in stage 2 based on 10% PMMA. This study led to the selection and optimization of the layer deposition based on hole carrier polymers in the case of freestanding devices based on Irq(ppy)2, Ir(ppy)3 and Alq3. The conduction mechanisms described on freestanding devices based on 10% PMMA fibers were also studied in the simple metal/organic semiconductor/metal structure on a flexible substrate. On these types of devices, the mobility of the charge carriers that influence the charge transport through the FOLED device was determined. The current-voltage characteristics presented on the freestanding devices based on PMMA 10 wt% showed a maximum breakdown voltage of only 2 V after optimizing all layers by changing the initial optical transmission of the electrospun fibers, the thickness of carrier layers, different types of organometallic compounds used as well as the substrate used: glass, PET. To improve the mechanical resistance of the freestanding structure and implicitly the electrical properties of these devices, the concentration of the PMMA polymer used in the electrospinning process was changed to 12 wt%, which led to a change in the fiber thickness from 200-300 nm (in the case of PMMA 10 wt%) to approx. 500-700 nm in the case of PMMA 12 wt%. The obtaining process was thus resumed using 12% PMMA fibers on which were successively deposited by thermal evaporation: gold was used as the anode, PVK (for devices with Irq(ppy)2) and TPD (for devices with Ir(ppy)3) with the role of hole transport, Irq(ppy2) or Ir(ppy)3 with the emissive role, LiF with the buffer role and aluminum with the cathode role, followed by the transfer onto the bacterial cellulose membrane functionalized with polyvinyl alcohol of concentration 25 %. These devices were electrically investigated by highlighting the conduction mechanisms and comparing them depending on the density of PMMA fibers 12% and implicitly the thickness of all adjacent layers. Following these studies, it was concluded that for these types of devices, the optimal initial optical transmission of the fibers is approximately 52%, the breakdown voltage reaching 20V, the electrode for the optimal anode is gold, and for the cathode, it is LiF/Al, and the addition of an additional layer of n-type organometallic compound (Alq3) is favorable for the charge injection and represents an advantage for the formation of excitons in the emissive layer. The electroluminescence phenomenon could not be recorded on these types of devices, due to the emission on a very small surface given by the junctions between the fibers where all the layers of the sandwich structure are present, and the appearance of the emission can be obstructed by the high roughness of the electrospun fibers. For this reason, devices were made using a different manufacturing process, in which metalized PMMA fibers acted as the cathode. The process consisted of the successive deposition of the PEDOT-PSS type layers, Irq(ppy)2 20wt%: CBP or Ir(ppy)3 10wt%: CBP, by spin coating on the ITO substrate. Over this sandwich structure, electrospun fibers covered with gold on both sides were attached by thermal transfer for optimal electrical contact. These devices were investigated by electrical and electroluminescence measurements, highlighting the operating parameters.

In activity A.3.3, the devices obtained based on electrospun fibers were characterized by electrical, luminance, and capacitance measurements, compared to classic devices based on thin films.