The first purpose of this project was to study the stability of ferroelectric surfaces to test their suitability to be used as catalysts. The second purpose was to test model molecular reactions on a ferroelectric surface exhibiting a wide variety of different polarizations. The experiments were performed to the National Institute of Materials Physics (NIMP) installations in Magurele and to the synchrotron radiation facilities, Elettra in Trieste and Bessy in Berlin. The techniques that were used to achieve the proposed objectives were: High Resolution Photoelectron Spectroscopy (HRXPS), Low Energy Electron Diffraction (LEED), low energy / mirror electron microscopy (LEEM/MEM) with photoemission microscopy (PEEM) and near edge X-ray absorption fine structure (NEXAFS) spectroscopy.

In the first study, photoelectron spectromicroscopy data cubes with sub-micrometer spatial resolution from a lead zirconate titanate thin film are fitted in each spatial point for several areas investigated, and correlations between the results of the fitting parameters are established, enabling one to suggest that surface band bending manifests also in the case of samples with multiple polarization states. These surface band bendings may be used for preliminary assessment of polarization states by using the contrast in binding energy. However, the individual curve fitting of each spectrum and the analysis of correlations between the derived parameters (binding energies and amplitudes) yields results of deeper significance in deriving the distribution of band bending. This allows in some cases discriminating between the origin of the individual components, assessing charging effects and compensation mechanisms, also enabling one to establish correlations between areas with different polarization. It is found that the major part of the investigated areas consist in regions with outwards polarization and without out-of-plane polarization, with the presence of some isolated metal Pb clusters (Fig. 1 , Fig. 2)

Fig. 1. Results of the individual fitting of spectromicroscopic data for Zone 1 of the 50 nm PZT(001) film. (a, b) represents maps of amplitudes and Pb 5d5/2 binding energies for the first component; (c, d) the same for the second component; (e, f) the same for the third component. The components are numbered in order of increasing binding energy. In (f) the two (green and blue) circles designate in their centers the region where the spectra represented in (g) and (h) were extracted. In (g) and (h) also the corresponding fits with three Gaussian doublets are represented. 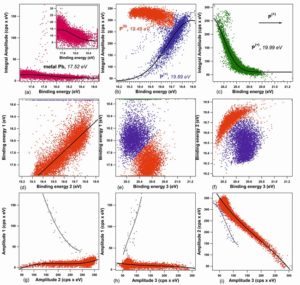 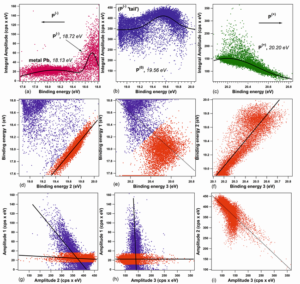 In the second study, the charge state of thin ferroelectric lead zirco-titanate (PZT) is investigated in a spectromicroscopic approach by combining low energy / mirror electron microscopy (LEEM/MEM) with photoemission microscopy (PEEM) and high-resolution photoelectron spectroscopy (XPS). Significant extrinsic negative compensation charge is proven to exist on the surface, indicated by high MEM-LEEM transition values and is correlated with the surface electrostatic potential, which shows the preferential stabilization of the outwards polarization ferroelectric state. The charge can be partially screened either by electrons interacting with the sample or by soft X-rays through the production of significant amount of secondary electrons. A radiation-induced surface charge compensation effect is observed.  The study indicates that thin films single crystal single-domain ferroelectrics can accommodate significant amount of polarization charge. A comparison with previous studies reveals additionally the importance of sample quality into the stabilization and preservation of single domain ferroelectric states. The investigation shows a phenomenological demonstration of surface charge on a ferroelectric thin film, which is of high interest in the field of FE-based electronic devices and in the recently expending area of field-mediated catalysis, considering the ability of FE surfaces to tune the surface charge upon the influence of an external electric field. 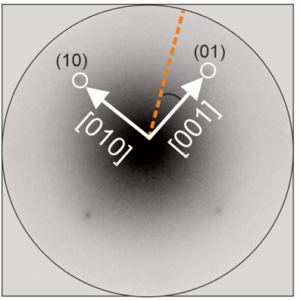 Laboratory of Surface and Interface Science